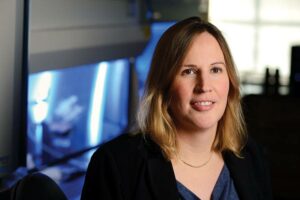 Oxygen is vital for normal function in living cells and is transported throughout your body via the vast 100,000 km network of blood vessels. Hypoxia – lack of oxygen to tissue, organs or cells – can cause a number of recognizable symptoms in people such as headaches and shortness of breath. Low oxygen levels are known to play a large role in the various levels of cognition (ranging from remembering to creating).  It can also have significant less evident effects on cellular processes during a person’s lifespan from development to adulthood ranging from tissue regeneration to cardiovascular disease as well as cancer. To combat these effects, researchers are developing methods to control oxygen levels using engineered systems and biomimetics, a reverse engineering process for synthesizing materials found in nature.

Johns Hopkins University’s (JHU’s) Sharon Gerecht, who has a joint faculty appointment with Whiting School of Engineering’s (WSE’s) Department of Chemical and Biomolecular Engineering and School of Medicine’s (SOM’s) Oncology Department, recently published a paper in Advanced Science, titled “Discretizing Three-Dimensional Oxygen Gradients to Modulate and Investigate Cellular Processes,” on her innovative work to study gene expression in cellular behavior, with relation to rapid change in oxygen concentrations. Gerecht’s team designed a platform that would allow them to control oxygen concentrations, using a hydrogel, so they could study uniform cell behavior. They then took this platform and applied it to study the dynamic formation of the blood vessel network made up of capillaries — which serves as a vehicle, transporting nutrients and oxygen to cells —and proved that distinctive gene expression patterns are uniquely linked to rapid changes in oxygen concentrations. They discovered a new mechanism and signaling pathways that facilitates cell survival and clustering in high stress microenvironments by forming cell clusters.

This work has resulted in the development of a platform that can be used to keep cells alive in artificial microenvironments with the potential to study cellular responses to rapid changes in hypoxia as it pertains to human development, disease, and tissue regeneration. The work was supported by the Sidney Kimmel Cancer Institute, Johns Hopkins University, National Cancer Institute, NIH/National Heart, Lung and Blood Institute, NCI Physical Sciences Oncology Center, and Air Force Office of Scientific Research.

“This work has given the research community valuable insight into the biophysical implications of hypoxia to fields outside of conventional biomedicine, such as aviation and space,” said Larry Nagahara, WSE’s Vice Dean of Research and Translation. “Specifically, the system is unique as it allows for analysis of rapid changes in oxygen on progenitor cells, which are descendants of stem cells with the primary function being cellular repair and maintenance. Progenitors are recruited during reduced blood flow, tissue exposed to low oxygen, or in those extreme conditions that pilots and astronauts face during their missions.”